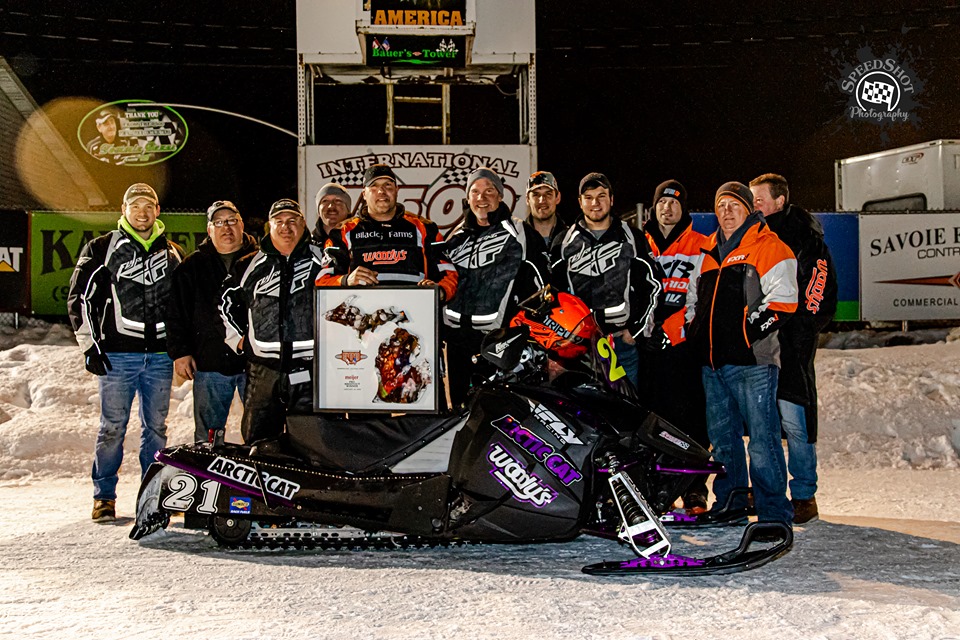 Taking the lead at the drop of the Green Flag, Troy DeWald led from start to finish to score the victory in the Inaugural Meijer Pro Shootout at the International 500 Snowmobile Race Track. His second Feature Win of the week after winning the International Snowmobile Racing, Inc. (I.S.R.) Formula III Feature the previous night.

The 50-year-old rider of the Cadarette Collision Racing #21 / Arctic Cat – Snowmobiles entry, who earlier in the day won his 11th overall and Fourth consecutive #SooI500 Pole Award, started on the outside of the front row next to Meijer Pole Award winner, Luke Krentz and beat the rising star to the first corner to take the lead he would never relinquish.

Earlier in the day, the 50-year-old legend on his Cadarette Collision Racing #21 / Arctic Cat Snowmobiles machine turned in the quickest lap of the week at a 39.873 = 90.287mph.

Also earlier in the afternoon, The 20-year-old Krentz from Hubbard Lake, MI won the Meijer Pole Award aboard his K.M.W. Racing #7 / Arctic Cat Snowmobiles entry. He turned in a lap of a 40.270 = 89.397mph. It was Krentz and DeWald winning the Meijer Heat Races to transfer into the Feature.