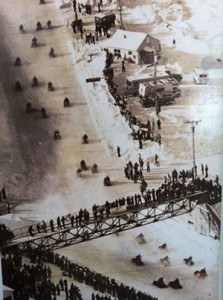 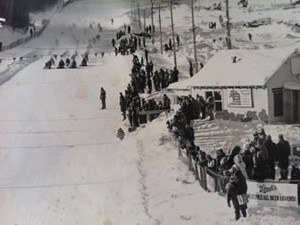 The I-500 Snowmobile Race was dreamed up from a 1968 Chevrolet Camaro that was sitting in a car dealer’s window. It was late in the winter of 1968.

Several businessmen from Sault Sainte Marie were admiring the fabled muscle car; all brightly emblazoned with the official marks of the professional racing circuit. Its appearance declared it would be the official pace car of the upcoming Indianapolis 500 – the most legendary motorsports experience of the Mid West. As these local pioneers were all forward-thinking winter sports fanatics, the question was soon asked, “Could a snowmobile run 500 miles?”

They would all find out very soon.

You see, the town of Sault Sainte Marie had never been a bustling hub in the dead of winter. In fact, there were few tourists to speak of at that time of year, and the businesses went into a sort of hibernation mode. But these local dreamers saw a better use for the snow and the ice, and the cold so common to the Upper Peninsula. They decided, in the weeks and months that followed that fateful breakfast, to forge a race loosely-based on the Indy 500, but strictly for the machines best suited for their near-artic weather: snowmobiles.

Once outlined, the idea caught among residents and other business owners like a cold flame!

The I-500 Committee was created. Land that was owned by Sault Sainte Marie was acquired for the race. The track design was put to paper by a member of the US Corp of Engineers. Work crews came in from all over the U.S. and Canada to complete construction. With great vision and unyielding tenacity, North America’s first and only 1-mile oval ice track took shape and become an iconic monument and racing reality.

Before long, time trials for the I-500 began. Riding teams from across the continent began to try their snowmobile skills, and Sault Sainte Marie was put on the motorsports map. On February 8, 1969, the first official race day of the I-500 had finally arrived.

The day was cold but bright. One Detroit sports writer raved about all the local activities in his Saturday morning article, but wondered if any machine would make 200, let alone 500, miles. He, and all the rest who had come for the show, were in for a huge surprise!

By the end of the race day, a very tired Ski Doo rode by Dan Planck of Davidson at the helm – finally crossed the finish line; followed by only 26 other machines. They had all traveled a combined 13,891 miles; each of them completing their 500-mile quota in one day.

They had done it!  A new, exciting, competitive snowmobile experience had been born. And there was no turning back….

The 2023 International 500 Snowmobile Race will be the 54th running of the most prestigious and grueling snowmobile race in the world. Come out and be a part of history from Monday-Saturday, January 30th to February 4th 2023